People tease me about how I’m always prepared for anything, mostly because I make up things in my own head. Ok, so I’m super proactive and maybe have a little too much time on my hands, but I don’t see that as a bad thing.

One of the women from high school that I still keep in touch with on FB will occasionally post obituaries that she likes. Seems a little crazy until you read each one she picks and realize how much you feel like you knew that person and how much they celebrated life. If for some tragic reason I die early and my family is too stunned to write my obituary (or worse yet, writes one in haste), I decided to take the courtesy of doing it for them. Granted it may need a little brushing up, but here’s where I’d start. (And, I’ve omitted the names to protect the innocent.)

FGH planned to live to be 117 so that she could see a third century with the love of her life, RS. (It was his idea to live to be that old, not hers.) While she didn’t make it to 117, she lived life fully and had a lot of life in her years.

FGH is preceded in death by three grandparents she got to know well until her adult life. Her late paternal grandmother, MR, taught her how to sew, how to fix any mistake that was worth fixing, and that dessert was a necessary component to every meal. Her late maternal grandfather, JY, shared her love for cheese and funded her childhood arcade games by purposely losing quarters in his recliner for her to find. And, FGH inherited her love for travel and adventure from her late paternal great-grandmother, LR.

FGH is outlived by her parents, LR and RR. Her mother, LR, was an inspiration to her and always made time, even if it was just for an evening chat to catch up, regardless of how busy she was or how many things she had committed to. Her father, RR, gave her the stubbornness to accomplish anything in life she set her mind to, which she exercised often. FGH was equally her mother and father’s child and was blessed to possess good and bad parts of them both. 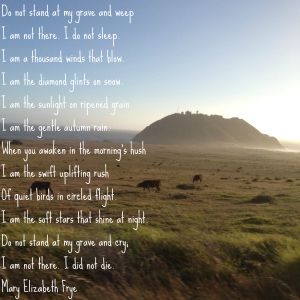 FGH’s soul mate and best friend was RS. He found all the good in her and made sure that FGH could see it as well. He taught her self-love and true love, and supported her in her many adventures. You can bet she’s waiting impatiently in heaven for him to arrive as she enjoyed every moment she spent with him.

BMR was FGH’s older brother. They grew to be close friends in adulthood and would share many secrets, trusting in each other for support and advice. BMR gave FGH a nephew, GR, that would be the spitting image of him.

FGH’s younger brother was BJR and was her closest friend as a child. He had a sensitive side to him that FGH always felt the unnecessary need to protect and took on that duty until he married his wife, SR. SR became like a sister to FGH and blessed her with three little nieces, ER, AR, and LR, which she cherished.

FGH’s youngest sibling and only sister was KS. KS was the tormented younger sister during childhood, but never let that affect their relationship in adulthood, and proved to be a solid friend. KS met her husband, JS, and had two beautiful children. KS gave FGH the gift of experiencing human life with the birth of her son and FGH’s Godson, BJS, followed a couple years later with her niece, BAS.

FGH’s greatest passions were: spending time with friends and family, laughing, exploring, traveling, writing, challenging her mind and body, baking, reading, and cuddling with her KISA.

In lieu of gifts, it is asked that you take your entire family on a trip to the ocean or mountains to treasure the sacred gift of life, family, and love…and make sure to mix in a little adventure.