← Life in Limbo
The First Trimester →

Life No Longer in Limbo

My last blog post was on July 11th and talking about my life in limbo. I was in flux with my job, my housing situation, and my personal life. I was trying to make sense of things and trying to force things to happen, like I always do. What I didn’t know was that I was 24 days away from learning I was pregnant and 48 days from learning we had an accepted offer on our new home. It’s funny how when a couple of things go your way, nothing else in life seems to matter.

On August 4th I woke up exceptionally early. I was out of the office and at Salesforce for the week training on their CRM. I was still new to the whole “Aunt Flow” thing since getting my IUD removed in mid-May, but the novelty was already gone. And, I didn’t like the idea of feeling unprepared. My cycle still wasn’t consistent as my body was learning how to function again. We’d gone camping during what my Glow app had told me was my fertility window and there’s something about being 10 feet away from your friends and sleeping on the ground that doesn’t scream baby-making. I’d also heard that there’s a certain intuition about knowing you’re pregnant. I had no intuition, but I was excited that I’d finally bought pregnancy tests and decided to try one out that morning. I remember sitting there checking email and not even feeling tempted to look. I wasn’t really excited – it felt more like a obligation. I about fell over when I saw there were two lines.

Being the uber-prepared person I am, I’d bought a 3-pack of white onsies at Target around May to have on hand in case a baby fell from a stork and we needed to cloth it. I found them from my hidden stash and wrapped them up with the pregnancy test, waiting very impatiently for my KISA to wake up. I tried to temp him with an unassuming belated birthday gift, with no luck. I waited for him to get done getting ready for work and then tried again to convince him to open it before going to work. He wasn’t having it. Sometimes him being insanely patient makes me incredibly impatient. I don’t recall if I threatened him or what exactly I did before he reluctantly opened the gift. He seemed to be in about as much shock as me as he processed what the two lines meant and the WTF set in.

We basically laughed all morning, not making much sense of it. There wasn’t any real talk about anything because I think we were both still trying to process it. All that day and every day that followed for the rest of the trimester I was convinced I was going to lose the baby and waited for that moment to happen. It wasn’t supposed to happen this early. I still didn’t feel pregnant and had no symptoms to tell me I was. I didn’t even feel an attachment to the baby. My KISA laughed at me when a week later I took another pregnancy test, just to see. Yep, still pregnant.

22 days after we learned I was pregnant was our first prenatal appointment. I assumed they’d have me pee in a cup and confirm I was pregnant. Nope. They had a portable ultrasound machine waiting for us in the room. When the nurse walked in she recognized me from May, laughed, and congratulated us being very quick. She then proceeded to perform our first ultrasound. I’m not really sure what I expected since I was still in denial about being pregnant, but they found the baby (or blob) right away. She then proceeded to comment on how it was the strongest heartbeat she’d seen this early. I was really pregnant. 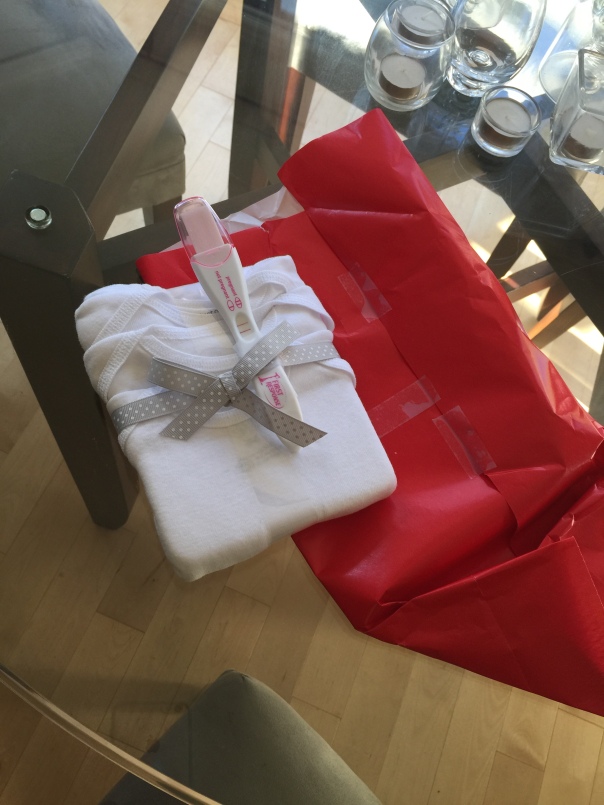 Posted on November 24, 2015, in Life in 'Frisco. Bookmark the permalink. Leave a comment.

← Life in Limbo
The First Trimester →