This year for Christmas it was going to be my KISA and my first time spending it with my family, without him. We’d planned to go back to Wisconsin for Christmas, but were appalled with the price tags that accompanied such a trip. We talked about not going back, but I couldn’t bear the thought of not seeing the joy of my nieces and nephews opening their Christmas gifts; I already have to watch them open their birthday presents via Skype without the excited hug that goes with being in person. Since I have the luxury of working from home, we booked my ticket to go home for 10 days and were waiting for the prices to go down for him to join me the following weekend. Unfortunately the prices continued to go up, not down. We decided to cut our losses and just have him meet me at his parent’s for Christmas after my time in Wisconsin.

As it got closer to Christmas my KISA started admitting how extremely bummed he was about us spending all that time apart, especially since it was only a week and a half after I got back from India and he would be gone for that weekend in between. I was torn because my excitement for seeing my friends and family was starting to dwindle with my sadness for having to miss him.

The week I was to leave my KISA had a last-minute assignment to support a potential deal in Chicago that was going to require him to fly out on Wednesday night. I was gutted at the idea of us now having to spend two more days apart.

However, Santa was working his Christmas magic and had his company allow him to stay through Sunday morning if he’d like and fly out of Madison. The only problem was that I was getting into Madison at 8 pm on Saturday, so the logistics were less than perfect. I had to start working my magic. I called Frontier to find out how much it would be to switch my flight to Friday. $338. In addition to what I’d already paid. Ok, not going to happen. Paying for a new flight was going to be about $200 and I knew my KISA wouldn’t allow such a thing. Shit. Then I started thinking about the stockpiles of frequent flier miles I have with basically every airline. When I’d originally checked the dates for the flights there weren’t any reasonable coach ones available, but when I looked at it for that Friday as a one-way ticket to Chicago, instead of Madison, it was only 12,500 points with American Airlines. That was less than the miles I’d earned with them for my flight to and from India. I also sent out text messages to every member of my family to see if we could do Christmas on Saturday, one day earlier than planned. I received confirmation from everyone that it would work for them. I booked my ticket on Tuesday and was beyond ecstatic about being able to spend Christmas with my family and my KISA (my new family). I don’t think I slept at all Thursday night and had requested that my KISA not tell my friend Jeni that I was coming into town early as he’d made plans to go out with them Friday night in Chicago.

When I landed I couldn’t get my rental car and to the hotel fast enough. I dropped my bags, changed my clothes, and hailed a taxi to Eataly, where they were getting ready to have a very late dinner. Jeni’s shriek and her husband Luke picking me up and swinging me when they saw me instantly made up for the airline points I’d spent to come in early.

Saturday I was anxious to get to my hometown to see my family. When we arrived and were getting our bags out of the trunk I heard a knock on the window. There was my five year old niece, Emma, waving enthusiastically at the window. Shortly after that we heard the pitter patter of feet upstairs and knew my three year old niece, Abigail, had woken up from her nap. I ran upstairs with my KISA trailing closely behind. Her sleepy little face looked up at me and she threw her arms out and yelled by name. After I squeezed her she noticed my KISA behind me and called out his name. The joy on her face to see us made me melt. One by one my other siblings and their kids came to my parent’s house. I was in heaven.

In our family we have a tradition of one person opening a present at a time from youngest to oldest. All my nieces and nephews opened their gift from Randy and I first. The little girls were all excited about their shoes from India and had to put them on immediately. My nephews were pleased with their gifts as well and my six year old nephew and Godson, Brady, unfortunately loved his Patriots Tom Brady sweatshirt so much he continued to wear it for the next three days. (My KISA couldn’t have smiled any bigger.)

After a few rounds of gift opening my mom got to a card that my sister’s kids had given her. She opened it and it was thanking her for watching them when they got done with school so that they didn’t have to go to daycare. It was a money card and when she opened the flap she read the cut-out that was taped inside it. It was in the shape of a ticket and informed her that she was entitled to one roundtrip flight, with my sister, to San Francisco. My mom was so touched by it she started crying, which made me want to cry.

After the gift opening we played some music, as Lily the youngest loves to dance. All the kids were dancing and I was swinging them around. It was pretty perfect.

I was sad to have to take my KISA back to the airport the following morning. I was grinning from ear to ear the entire time, thinking about how great the day before was and how complete it was with my KISA being there. Little things like coming into Madison and seeing the city alive, even with it beyond freezing, and the Packers straw on my McDonald’s smoothie were merely icing on the cake. I had just had one of my favorite weekends.

A couple of days later my KISA and I were talking on the phone. He was fretting over what he was going to get me for Christmas. I told him that he sincerely had given me everything I ever could have wanted for Christmas: my family and him together for Christmas; fulfillment again.

Brady and my KISA loving his Tom Brady sweatshirt 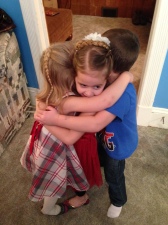 Ms. Emma (the baby in the picture from yesterday)

And Lily, the baby of the family

Posted on January 5, 2014, in Life in 'Frisco. Bookmark the permalink. Leave a comment.