You know how if you eat something when no one is around to see it then it doesn’t have any calories? I also believe that defeat isn’t really real until you say it out loud.

Everyone that knows me well (or even just reads my blog) knows that I like to have my cake and eat it too. There is no limitation to what can be done and if you try hard enough you’ll find a way to make it happen. Where there’s a will there’s a way and I’ve always had a lot of willpower. I’m not familiar with not being able to do something I set my mind to. This used to really annoy my KISA until I started sharing in the benefits and made sure he got what he wanted as well.

I started marathon training on June 3rd, going from being stagnant to relearning how to run two miles. My world (and my KISA’s, unfortunately for him) revolved around marathon training and especially the long runs every Saturday. As of recently I started having knee pains after my long runs, to the point where I could hardly run the rest of the week. Two weeks ago I met a girl that has run two marathons and done an Ironman and I was sharing my knee pains with her. She suggested that maybe I was over-training. I felt like I wasn’t training enough. The following day at brunch I met another girl that did ultra-marathons and I again discussed my predicament. She suggested a couple types of supplements I should start taking to help with my joints. She swore by them, as she’d been taking them personally, so I went to Whole Foods the following day to seek them out.

Last week I was at the gym and decided to inquire about personal training sessions. The lady at the front desk offered to give me a free one and told me about a package where you can get 3 for $99. She referred me to Natalie, giving her high praise as she’d done marathons and ran a lot. I met with Natalie on Friday for our first session. I explained my marathon training and my knees pains so she had me do a series of squats, lunges, planks, and balances. What I didn’t realize at the time was that she was assessing my stiffness and informed me that I needed to start using a foam roller daily. When you run or exercise your muscles tear a little bit. When it repairs itself it creates scar tissue and tightens your muscles. She taught me how to use the foam roller to focus on my quads and hips. Basically, you put all your body weight onto the roller in those spots and embrace the excruciating pain. And boy does it hurt. But, when you’re done you feel like you have a whole new pair of legs. I bought one the following day.

After we were done with the roller she asked if I’d had hip pain before. I told her that the week before when I did my 14 mile run my left hip hurt, but my knees hurt a lot worse. After my ice bath my hip felt fine and it never bothered me again. She explained how the muscles up by your hips actually support the stability of your knee and that once we strengthened my hips we could also reduce knee pain. To reconfirm that was the issue she had me lie on my side, put my top leg forward, parallel to my other leg, and back while she pushed against it. My job was to resist. Then we’d switch sides so that she could test the other legs. We did this twice on each side and quickly realized the issue as I couldn’t resist her pushes when my legs were back. We practiced a series of exercises to strengthen my hip muscles, she told me to practice them throughout the next week, and sent me on my way. I felt good about her reassurance that my knee issues weren’t really knee issues and was something we could easily work to overcome.

On Saturday morning I woke up to do my 16 mile run, but didn’t feel 100% as I felt nauseous. I tried sleeping it off, hoping to still have the late morning and early afternoon to get it in. I didn’t feel any better. I decided that I’d complete my long run on Sunday instead and my stomach didn’t feel any better for the rest of the day.

Sunday morning I woke up and felt great. I started off on my run and noted that my hips hurt, but I knew that it was only because we’d just worked them two days prior (and nobody likes working). I kept doing mental checks of how I was feeling throughout the run and until mile 6 I felt great. At mile 8 was the turnaround and I popped an energy block in my mouth and instantly regretted that decision. My stomach wasn’t settling with it and my knees and hips were already throbbing. I decided for mile 8-10 to walk/run, knowing that was going to end badly. I spent miles 10-12 walking and trying to call my KISA or get a taxi to take me home. By this point in time I was in excruciating pain – no longer my stomach, but just my hips and knees. I finally found a kind enough taxi drive to trust that I would pay him once I got home and got my money. Upon getting home I immediately took my ice bath, but was surprised to find that the relief I usually got from an ice bath wasn’t really working.

I reworked my training schedule so that I was no longer training up to 22 miles (which isn’t normal, but was something I wanted for myself) but instead the standard 20 miles and made my 18 mile run for this week a 16 mile run to attempt it again.  I’ve waited patiently every day in vain for my knees and hips to feel better so that I could get in my weekly runs. Yesterday morning I even tried doing Insanity for some cross training, but found all the jumping around only hurt my knees worse.

Last night when I got home I was really excited about the prospect of sewing of some of the new material I’d purchased. I finished two seams and as I started on my third one my sewing machine stopped working; it was jammed up. I was finally able to force it to at least run again, but the needle was no longer hooking into the bobbin to even begin sewing. I proceeded to spend the next three hours taking my sewing machine apart, watching YouTube repair videos, looking up the owner’s manual, oiling it, searching local sewing machine repair places, calling sewing machine repair places, etc. Nothing worked. During the course of this my KISA was able to see my mood deteriorating and decided to “run some errands”. When he came back and saw the sewing machine in pieces he encouraged me give myself a break from it, seeing how upset I was getting to not be able to fix it. He brought me home two gifts from Bed Bath and Beyond and tried to convince me to play with them (he’s going to be at natural at this parenting thing). I instead decided to go to bed. 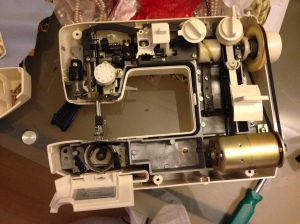 As we were lying in bed my KISA pushed to find out what was really wrong. He obviously knew I was upset about the sewing machine, but knows me well enough to know that was only the surface issue (which, I should note, is why I’m going to marry the sh*t out of him). I held back tears as I finally admitted to him my fears of not being able to complete the training program or the marathon. I told him that if I couldn’t complete the 16 miles on Friday I was basically doomed. I told him I wasn’t sure if my knees could hold out. I’d told all these people I was training for a marathon, so I’d be letting myself and others down. I told him that if I couldn’t complete my marathon now, I’d probably never be able to. Then I realized I was admitting defeat. Out loud.