My KISA and I proudly finished the Tough Mudder in Tahoe on Saturday. They sent us the map of the course the night before and I made the unfortunate mistake of reading it before we went to bed. Mind you, the trip to Tahoe took 6.5 hours because of traffic and stopping for dinner, so by the time I was reading this in the hotel it was 11 pm. And we had to get up at 5 am to leave for the race. I learned the course was 5.25 miles straight up a mountain and then another 5.25 straight down. The elevation at the peak was going to be 8500’ and I was all too familiar with altitude sickness from our trip to Colorado to hike a 14’er. Oh, and did I mention there would be 19 flipping obstacles?? Needless to say, I didn’t sleep very well that night. The thing I was most concerned about was my knees. I’d iced them many times since the 10 mile run on Thursday and even iced them before I fell asleep Friday night. When I woke up Saturday morning I realized no amount of ice was going to make my knees not be swollen.

When we left for the shuttle pickup it was 44 degrees. Yes, Fahrenheit. My KISA and I had contradicting ideas of what the temperature for the day was going to be: he thought it’d be in the 90’s according to his weather apps and mine told me low 70’s. So, we didn’t really know what we were getting ourselves into.

The start of the race. You can see the uncertainty on my face.

We got to the race pretty early as we wanted to get back to the city to go to a show later that evening, and we had no idea how long the race was going to take. Or if we’d make it out alive. (Yes, you literally sign a death waiver as people have died from such events.) They had a 7:40 am heat for the first wave, so we decided to get in the 8 am heat (the heats went every 20 minutes after us as well). I think my first dose of reality was as we were walking up to the starting line and you had to climb a wall to even get to the start. And, that didn’t even count as one of the 19 obstacles. FML. My second non-scheduled obstacle was when they asked all of us to kneel for 10 minutes while they explained the race course to us, paid tribute to the fallen soldiers, and gave us our pep talk. After about two minutes my “kneeling” turned more into a hunched-over half sitting position as I realized my knees really weren’t going to make it through the race. As we were about to start the announcer made us all take note of a huge divot in the ground to ensure no one broke their legs at the start of the race. This was becoming all too real.

The race started and my KISA somehow talked me into doing a walk/run for the course, which we continued throughout. I was kind of surprised at how easy it actually was for me, given the altitude and steep inclines. Maybe I really was tough. 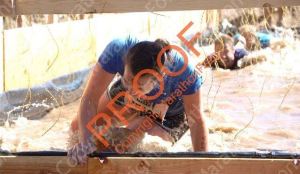 Our first three obstacles were before we even made it to mile marker one. The first one was an obstacle called Glory Blades. It’s essentially a slightly slanted wall you have to climb over. I was pretty proud of the fact that I made it over with ease and no assistance. Ok, this isn’t so bad. Our second obstacle was called Kiss of Mud. As I saw the man spraying a fire hose of freezing cold water onto a pit I realized why it was called Kiss of Mud – you army crawl through mud with barbed wire above your head through a pit. Now, it may not have been so bad if it was actually mud. The problem with being in the second heat is that it was more like wet, hard ground, with lots of rocks and debris. I could feel my legs and arms being cut up as I dragged myself across the freezing cold, hard ground. When I made it out, my KISA was standing there with a huge grin on his face and gave me a high five. I think it gave him hope that maybe I’d be ok throughout the race. The last one we came to before the completion of the first mile was called Arctic Enema. I don’t really understand enema part, but I definitely understood the arctic part. You get into a tank filled with water and ice. Ok, at first I didn’t think that would be so bad because I was covered in cold mud and at least it would clean me off. What I didn’t realize until I stepped into the tank was that halfway through there’s a board that forces you to go underwater with barbed wire over the top of it to ensure you can’t go over. When I made it to the board I grabbed the underside of it to get an idea on how low I’d have to go and used it to pull myself under. When I came back up I had the worst head rush I’ve ever had. Think of it as eating an entire carton of ice cream in one bite, but only you don’t get any of the enjoyment out of the taste of ice cream. That one knocked me out a bit and my KISA could tell I was uneasy. He asked if I needed to take a break, but I’m stubborn and refused. We decided maybe running would be the best to help warm my body up again, which it seemed to.

At this point in time I realized we weren’t even 1/10 of the way done and only 3/19 done with the obstacles. I had a moment of silent panic, especially as I remembered that I’d have to do the Kiss of Mud obstacle another time later in the course. But, for some crazy reason I found that my body somehow adapted and the obstacles no longer seemed like a big deal, nor did the running.

The rest of the obstacles were as follows:

After we got done we hosed off, hung out for a bit, and then headed back. We learned from the bus driver that we were one of the first ones (and were the only ones on her bus). It kinda made us feel bad-ass. We got back to the car and scrubbed some more with baby wipes in knowing we’d need to grab some lunch. We also stopped at a CVS to get my darling knees some instant ice packs. We both LOVED it and actually thoroughly enjoyed it. It was a good physical and mental challenge.

I love this guy