← Back to Life, Back to Reality
DC Wedding Attire →

Last, last Saturday (two ago) my KISA and I took the red eye out to DC for my friend George’s wedding. He married this pretty awesome woman named Kristen. Interestingly enough, I was there when they met, gave Kristen some advice on George, heard stories from George about how amazing she was in the days following, and lived next door to George in Vienna during the first few months of their relationship. They’re a pretty great couple, so I wasn’t going to miss that wedding for the world.

We had a friend that was flying on a red eye out of LA and getting in at the same time as us and another friend that had gotten in the night before from Mexico. The four of us rode down to VA together, sharing stories of the foreign lives we used to live. I crashed hard once we got to the hotel, but I don’t think the boys minded as they all went to a vineyard to have some drinks (yes, interestingly enough there are vineyards right outside DC, in VA….who knew, right?).

So, it’s funny how once you have to start planning a wedding how much you start paying attention to other weddings. And, their wedding was pretty near perfect. Just to give you an idea, it was at a vineyard. Their ceremony was on an island, with a pond surrounding it (as if the vineyard wasn’t beautiful enough), that had a bridge going out to it. And, there were old farm buildings in the background. Our first glimpse of Kristen was as she was walking through one of the rows of the vineyards off in the distance, walking across the bridge, and then coming down the aisle. On a frickin’ island. It was quite probably the most gorgeous wedding venue I’d ever seen. After the ceremony we walked back across the bridge to a patio area that had a fireplace and had chairs and tables set up, as well as cocktail tables with some pretty delicious cheese. And, an open bar…that had Mike’s Hard Lemonade. I’m pretty sure they didn’t forget any detail.

We proceeded to drink our way into the evening. At one point in time a couple of my friends decided it would be a good idea to jump in the pond. They were pretty discreet about it…until they walked back in with their hair and clothes soaking wet (they didn’t jump in with their clothes on, but obviously had to put them back on after being done swimming. It’s making me reconsider my desire to get married on a lake as I have too many friends that might consider that a good idea. 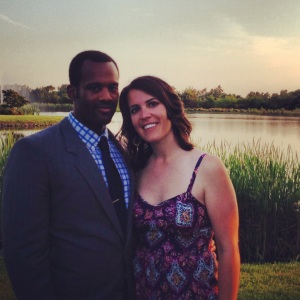 ← Back to Life, Back to Reality
DC Wedding Attire →