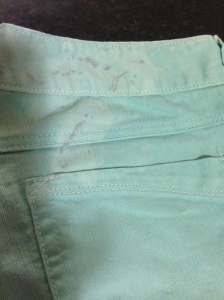 I don’t think I’m destined to own mint jeans. I’d give my first born to own a fantastic pair, but apparently the universe doesn’t want my children.

Last spring I fell in love with the idea of owning a pair of mint jeans. Unfortunately the Midwest gets styles three years after the rest of the world, so no such thing existed yet. Since I’m incredibly impatient, I decided to make my own pair. I bought a pair of white jeans from Express and then proceeded to dye them green and aqua blue. They turned out to be a color close enough to mint to satisfy me. I wore them about a half a dozen times before something in the wash decided to turn them a blackish purple. I tried in vain to remove the stains, but instead lightened the color around the stains and did nothing to the stain.

After going without mint jeans in my life again I decided it was time for a rebirth. Gap had skimmers in mint green that I feel in love with. I opted to buy them in extra-long so that I could wear them as pants and roll them if I wanted skimmers. I loved these jeans and daydreamed about what I could wear them with. My life was complete again. But only for a little while. 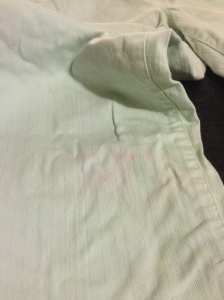 My second favorite child is a pair of red capris I own. (Actually I’m no longer sure that “capris” exist. Now they’re skimmers, cropped pants, or ankle-length pants. Capri’s are so 2000.) My red capris became jealous of my love for my mint jeans and decided to retaliate. First, my KISA decided to wash my red jeans with a load of miscellaneous other clothes…on warm. I’m sure you can imagine what happened. Among the things ruined was a navy and white gingham shirt that I recently replaced. I was not happy. My red capris were on probation for a while and behaving nicely. That is until the moment they’d be waiting for happened – they were washed in the same load as my mint jeans. My KISA washed the load on cold, but my red capris didn’t give a shit – they were out for revenge. When we pulled the violated and emotionally damaged mint jeans out of the wash we realized the extent to what the red capris did. Thankfully, they targeted their anger only towards my poor, precious mint jeans. There were pinkish red scars all over my mint jeans. I first tried washing them in a new load with some color optimizing detergent. Nothing. Next I tried a baking soda, Dawn, and peroxide mixture. Still nothing.

I went on Gap’s website to order a new pair in extra-long…only to find out they no longer had them available in my size. WHAT??? My KISA, not understanding the depth of this tragedy, suggested that I buy another color and start a new trend since everyone he sees are now wearing mint jeans. After piercing him with my glare I looked into other colors. But, it’s like shopping for a new puppy after you dog dies; you can’t just replace it with another one and hope it fills that hole in your heart.

I’ve presently settled on a pair of muted highlighter orange pants. But, they’re no replacement.

Posted on May 9, 2013, in Clothing Pintrinspiration, Life in 'Frisco and tagged mint jeans. Bookmark the permalink. 1 Comment.