I decided last night that I wanted to try to make some sweet potato and kale chicken patties (Again, another recipe name that lists all the ingredients. I’d prefer to call them Sweet Baby Jesus Cakes) that I found on Pinterest and I think I’m in love. I will warn you, the recipe requires a lot of chopping. Thankfully we have a Pamper Chef chopper that neither of us could live without. However, I did learn the hard way that it doesn’t chop meat very well. Ok, so I was being super lazy! But, it was worth a shot, right? I did sacrifice my wrist for the chopper to not get melted. I may have been talking on the phone while I was cooking (and I’m sure my friend loved hearing the sound of me continually chopping). Well, when I was putting stuff into the frying pan that I’d just chopped I dropped the chopper. Knowing how beloved it is in our household, when I saw it was leaning again the pan I grabbed it. Well, in grabbing it I burned a crescent moon onto my hand. It’s basically a tattoo. Isn’t that the cool place to get tattoos now anyhow?

My war wound. Notice the weird mole I have on my hand. I have a matching one on the other hand as well. I’m marked.

As I was reading the instructions, literally as I was making it, I realized it was supposed to refrigerate for 4 hours or overnight. Whoops. To be honest, I didn’t really notice that not refrigerating it caused any troubles. I believe the recipe is a paleo recipe (I’m sure with a little research I could find out, but I”m being lazy) because it has you use coconut oil and coconut flour. Well, I’m not healthy enough to stock those sort of things, so I used cooking spray and regular flour. I will say that next time I’ll use olive oil instead of cooking spray, though, as it burned them a bit.

Another airhead moment I had was not realizing that you’re supposed to cook them, not bake them. For some reason when I read “large non-stick pan” I immediately thought of a cooking sheet and proceeded to put them on the sheet. Again, as I started reading the directions, I realized that it didn’t give a temperature to cook it at. Maybe a good sign that it doesn’t need to be baked. So, I greased up a frying pan and cooked them.

Like I said, they were super delicious. I wish we would have had some sort of topping for it. I think next time we’re going to make some remoulade sauce to put on it. And, I will admit we had a bit of an argument after dinner about who got to take the leftover patties to work for lunch today. Naturally I won. And he did dishes. Double win. (Plus, they tasted great for my lunch today.) 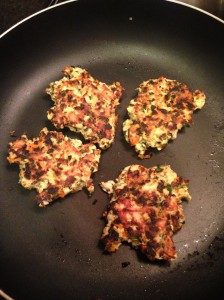 Don’t they even look amazing?

Posted on April 4, 2013, in Food Pintrinspiration. Bookmark the permalink. Leave a comment.